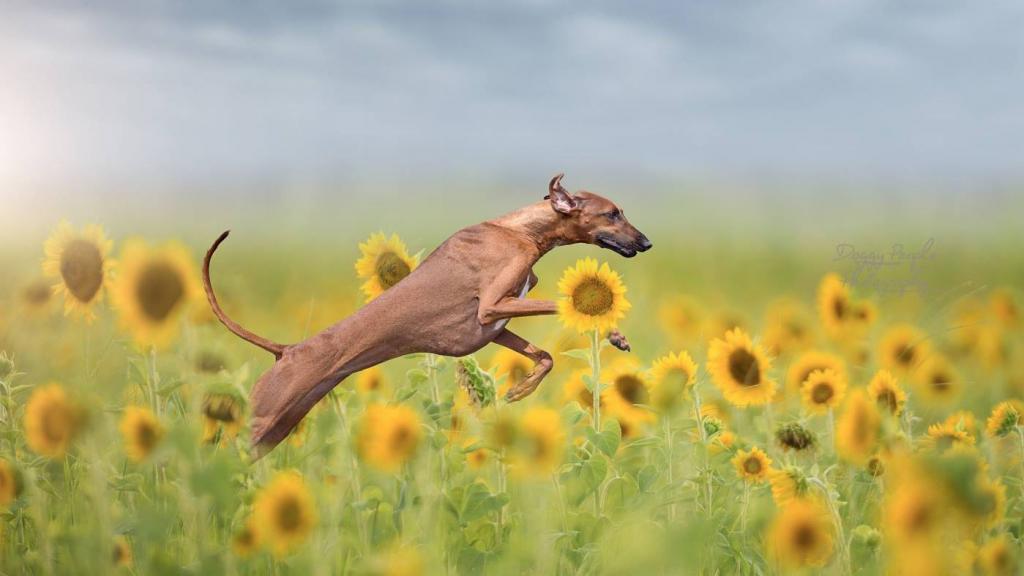 Brief historical summary
The history of the Borzoi dated from the XV century, to the Mongol invasion. The Tatars used sighthound of Arab origin – Koutsi, while the Russian hunters did not have sighthounds; when hunting they used extraordinary strong Loshaya dogs, who were able to catch and kill a deer or even an elk.
Koutsi and Loshaya crossbreed dogs became the prototype of the Borzoi. These dogs were depicted on the prayer book belonging to Grand Prince Vasily III, Ivan the Terrible father. In XVI–XVII centuries new bloods of Polsky Chart (Polish Greyhound) added the nobility to their descendants. Having grown the fame of these dogs crossed the borders of the Russian Empire.
Further development of the breed was influenced by crossbreed with the Klock – a huge, strong and fierce bearded Courland Sighthound.
Their descendants became dogs without beards, with long, fine hair. They marked the beginning of “Gustopsovy” Borzoi type.
The bloods of Greyhound added to the breed at the same time initiated the appearance of “Chistopsovy” Borzoi type. Bloods of Mountain (Gorsky) and Crimean Sighthounds known by their endurance were used later.
The Borzoi became the result of this multi-breed crossing. The vigilance, agility and expedition of the Borzoi in pursuing the game, its ability to flash-like rush, to tackle the game deftly at once, its savageness and courage, all these important qualities proved out to be very useful when hunting the game in short in irregular terrain. The Borzois were also successfully used for hunting in steppes, where it was required to work on longer distances.
Hunt with large packs of sighthounds and hounds and with special horses – “hunters” – appeared in the XVIII–XIX centuries. Such hunts consisted of up to several hundred dogs and differed from one another in type and working abilities. The Pershino hunt by Grand Duke Nikolai Nikolaevich was especially renowned, for both the exquisite beauty of the dogs, and their speed and passion for the game.
The first Congress of Borzois lovers was organized in 1874, but only in 1888 the Moscow Hunting Society adopted the first standard of the Borzoi, where a type of the Borzoi was unified after all.
N.P. Yermolov was the author of this standard. The fundamental principles of this standard still remain the same despite changes made in the XX and XXI centuries – in 1925, 1939, 1951, 1963, 1969, 1980, 1993, 1995 and 2006 years.

Temperament is calm; visual response is well evident.
Typical gaits: before the game to be found – slow trot and even walk; in chasing the game – full gallop.
The attitude towards people is neutral to friendly.

Aristocratic, narrow, long, in proportion to the general appearance; the head is so lean that the principal veins are shown through the skin. Viewed from the side the top lines of the head form a long, slightly convex line. Superciliary arches and zygomatic arches are not pronounced.

Facial region
Nose: Large, always black in any coat colour, considerably prominent in relation to the lower jaw.
Muzzle: Long, lean, well filled out in all its length, straight or slightly downfaced, slightly arched near the nose. The length of the muzzle, from the tip of the nose to the stop, is slightly superior to that of the skull, from the stop to the occiput.
Lips: Tight, well fitting, fine, with black edging whatever the coat colour.
Jaws / Teeth: Teeth white, strong, incisors are closely spaced; canines are not too wide apart. Scissor bite. Level bite is permitted but not desirable. Complete dental formula. The absence of 3rd molars (M3) and one or two P1 is acceptable.
Cheeks: Flat, not pronounced.
Eyes: Large, almond-shaped, dark brown to brown; eyelids are with black edging, tight-fitting.
Ears: Small, thin, mobile, pointed-tipped, covered with short hair. Set on above the eye level, set closely and backwards, pointing towards the nape of the neck. The tips of the ears are placed near each other, directed downwards along the neck and close to it. When the dog is alert, the ears are carried higher on the cartilages; their tips are directed sideward or forward. Sometimes one or both ears are erect like horse ears.
Neck: Long, dry, muscled, slightly arched, oval-shaped (slightly flattened laterally), of medium set.

Topline: Is a smooth arch.
Withers: Not marked.
Back: Broad, muscled, supple, flexible.
Loin: Rather long, arched, muscled, broad. Together with the back forms the smooth arch, which is more pronounced in males, than in females. The highest point of this arch is in its middle, that is the region of the 1st or 2nd lumbar vertebrae.
Croup: Long, broad, moderately sloping. The width of the croup measured between the two iliac tubers must not be less than 8 cm.
Chest: Oval in cross-section, deep, not narrow, yet not wider than the croup, let down almost up to the elbow-joints. Viewed from the side the forechest is somewhat prominent and places almost at humeroscapula level. In shoulder blades region the chest is rather flat, but towards the false ribs gets gradually wider. Definitely shortened false ribs.
Underline and belly: Abruptly tucked up towards the flanks.

Sickle- or sabre-shaped, thin, long, with dense and abundant feather. Passed between the hind legs and flanks, it must reach up to the iliac tuber. When the dog is standing naturally, the tail hangs downwards. In movement it is raised, but not above the back level.

Forequarters
General appearance: Forelegs lean, muscled, seen from the front perfectly straight and parallel. Shoulder muscles are well developed. The height at elbows slightly superior to half of the height at the withers.
Shoulder: Shoulder blades are long and oblique.
Upper arm: Long, moderately oblique. Angle of the scapular-humeral articulation is well pronounced.
Elbow: In parallel planes to the median plane of the body or slightly turned out (“in field”).
Forearm: Long, clean, of oval cross-section; seen from the front, narrow; seen from the side, broad; points of elbows strongly developed.
Metacarpus (pasterns): Rather long, slightly oblique.
Forefeet: Lean, narrow, of elongated oval shape (called “harefeet”); toes long, arched, tight; nails long, strong, touching the ground.

In everyday life the typical gait is the extended, free, easy trot. When hunting the gait is full rushing gallop.

Coat
Hair: Long, supple, silky, light, wavy or forming large curls. Small curls are permitted.
The hair of different length on different parts of body: on the head, the ears and the interior side of the limbs the hair is very short, close lying; on the back and the neck the hair is longer and often wavy; on the outer side of thighs and the sides is shorter and may form finer curls.
The feathering is rather long and shining. The feather is located on the neck (forming a “muff”), on the lower side of the chest and belly, on the back side of the forelegs antd thighs. The feather is from below the tail; at the tail root the curls are usual.

Colour:
White; pale of different shadings (red-fawn, grey-fawn, silverfawn: pale with light-grey shading); light red or light gray at the root of the hair with darker red or grey main colour; red with black overlay hair often combined with dark muzzle (sable); grey (from ashy to yellowish-grey); brindle: pale, or red, or grey main colour with dark stripes, like stria on marble; red; black; transitional colours between red or black.
All the colours may be solid, pied and with tans. Typically, any colour tends to lighten up downwards.
Any colours from white to black in any combination are acceptable, except of brown, blue, isabella (lilac) and their shadings, i.e. dilute colours with not black nose.

Any departure from the foregoing points should be considered a fault and the seriousness with which the fault should be regarded should be in exact proportion to its degree and its effect upon the health and welfare of the dog and its ability to perform its traditional work.
• Over- or undersize by 2 cm against indicated in the Standard.
• The length of the body more than 10% or less than 5% superior to the height at the withers.
• Eyes not big enough; deep set; round in shape; light (all shades of hazelnut).
• Teeth small; diastemas between teeth; absence of one or two PM2. Absence of one or more incisor(s) due to injure, if the bite is clearly evaluated.
• Topline is not smooth enough. Pronounced withers. Arch not symmetrical. The highest point of the topline evidently shifted towards the croup.
• Belly insufficiently tucked up; paunchy, pendulous.
• Tail a bit short, too high in carriage, with lateral deviation, with curled end.
• Abundant flecks on the body of the same shade as the base colour.
• Too straight, furry, dull, tousled coat; fringes and featherings poorly developed; lacking in feathering. Equal length of the coat all over the body; coat too harsh in shedding.

Severe Faults
• Head coarse with loose, thick skin; pendulous lips. Seen from the profile, blunt muzzle due to the nose not prominent enough. Very pronounced stop.
• Bleached (not dark enough) colour of nose, eyelids or lips in all colours. Partly depigmented (pink) nose, lips, eyelids (without signs of injuries).
• Eyes small; yellow; weak-sighted; with third eyelid too much developed.
• Absence of any teeth not mentioned under “Faults”.
• Ears low set; not placed closely directed downwards along the nape of the neck; set wide apart; too big; thick, heavy, coarse with tough cartilage; with rounded tips.
• The length of the body is the length of the body more than 12% or less than 3% superior to the height at the withers. Over- or undersize by more than 2 cm.
• Neck set high or low, round in cross-section.
• Sloping topline from well pronounced withers towards the root of the tail; pronounced roached back, straight back in males.
• Loin narrow, short, too long (the length of the loin is comparable to the length of the back), straight.
• Belly not tucked up.
• Fore arms massive, with bones round in cross-sections.
• Fleshy feet rounded or flat, splayed toes.
• Tail short, thick, with no feathering.
• Vivid flecks on the body of different colour than main colour; colour on the body not lighted up downwards.
• Abundant coat on entire body, excessive undercoat, rough, hard, bristle coat not in shedding, lack of featherings.

N.B.:
• Male animals should have two apparently normal testicles fully descended into the scrotum.
• Only functionally and clinically healthy dogs, with breed typical conformation, should be used for breeding.